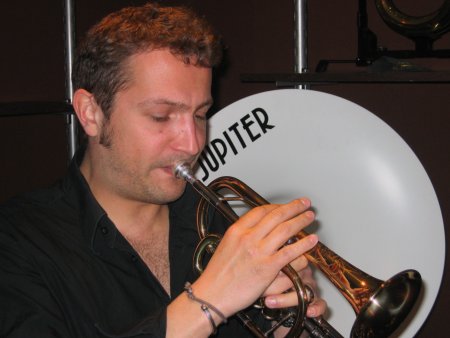 He spent his first eight years as a musician studying the cornet.

A teacher at the â€˜Conservatoiresâ€™ in the 8th and 9th districts of Paris, he teaches with the joy becoming of an educationalist who is really concerned with passing on his knowledge tp others.

He is a member of the Trombamania group (which contributed to the development of the new â€˜Sigmaâ€™ trumpet from SELMER) and of the Aeolus brass band, and has just joined the Â«Orchestre de la Police NationaleÂ» (the National Police Band) as flugelhorn soloist.

At home, instruments are never put away but placed on stands next to his sofa â€“ just like â€˜presencesâ€™ that are both familiar and respected. 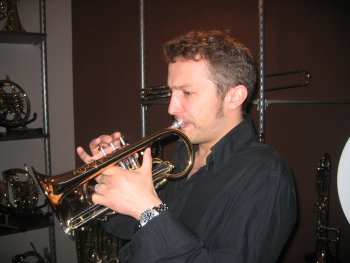 Excellent flexibility. This instrument allowed for a good attack, a little less precise in extreme pianissimos, but this came easily after working with the instrument for a time. The sound was very homogeneous â€“ from the fortissimos to the pianos and from the low to the high registers â€“ and was quite pure. This was especially so with the silver-plated model of course, which distorted less in the upper register.

Accuracy was absolutely as it should be. But let us give ourselves the luxury of being finicky. As on all cornets, we had to sustain the lower notes that tended to go flat and the upper notes that tended to go sharp. We had to adjust the first valve tuning slide on the upper Fs which seemed sharp on the models we tested. The upper G#, which seemed a little â€˜squeezedâ€™, lacked sonority and tended to lose its quality easily. The look of the instrument is very pleasing especially in the rose brass version which is very attractive. For me, the piston stroke is a little long and the ring on the third valve slide is too near the valve unit. Despite this and in conclusion, this is a very good professional cornet. I have a preference for the rose brass version which maintains the cornet sound that I love whatever the style of playing. This is a rare quality allowing the player to style the sound he wants more easily (with the silver version, the clearer sound stands out).

A Chinese picture of the instrument

If it was a colour: a romantic sunset over Mont St Michel Bay.

If it was a dish: honeyed ginger

If it was an animal: a mischievous chinchilla

As I had the opportunity, I tried the new student cornet. I was pleasantly surprised! Obviously it was a little more restricted than the professional version but it was very well-balanced (accuracy, sound, flexibility). The mechanism was very smooth and the sound very pleasing. It is an ideal instrument for a young musician, all the more so because it is excellent value for money!